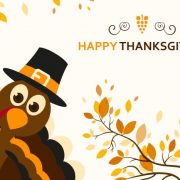 Thanksgiving is more than the festivities, it gives us time to ponder upon what lessons we’ve learned and how we can spread happiness around our communities and the world, to look back at all of our greatest memories and good people who came into our lives.

Happy Thanksgiving Day to you and your loved ones. 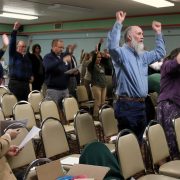 Click here to view photos from the District Cabinet Meeting! 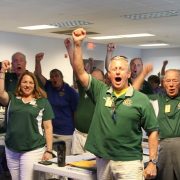 I wanted to take a few minutes to put a challenge to you and your clubs.  My challenge for you is to consider how you can change for the future, or even the present.  I’ll have more detail about this my GMT Message in the October newsletter.  As you read it, I ask you to think about what you can do to consider appropriate changes in your club.

For some perspective, I’d like you to read this article about Why Our Service Clubs Are Dying (and how to fix them).  It’s intended to be thought-provoking, but also to give us ideas about what we can do for the future.  We still have to determine what’s right for our clubs and our communities.  I hope that these ideas spark ideas for what you can do to strengthen your club and continue to say that We Serve.

As of Thursday, the Lions have surpassed a goal set by International President Bob Corlew.  He challenged us this year to reach 1,445,591 Lions and we passed that last night.  It has been since about 1998 since we’ve been that big. There’s also still time for clubs to bring new members in with a waived […] 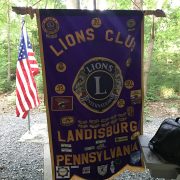 It it was a pleasant evening on Thursday, June 15 as the Landisburg had a special meeting at Little Buffalo State Park. The purpose was to induct new members and install the new officers. The club is in the process of adding several new members, but this induction included new Lions Logan Bittimg and Tammy […] 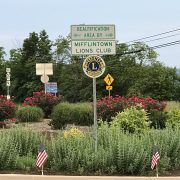 This wasn’t the official District Governor visit to Mifflintown, but it was eventful nonetheless.  Since we didn’t do a Lions Roar back in October, we had a good one tonight. After inducting a new member, I was given the honor of installing the club officers for 2017-2018.  Below is King Lion Harry being recognized by […] 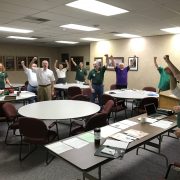 This morning, we concluded our last cabinet meeting of the year.  Each year, we vote on distributions for specific district projects from the amounts collected from clubs throughout the year.

As Disteict Governor, I appreciate the work of our cabinet this year, and especially all the work done by our clubs.  It’s amazing the impact we have within our four counties and beyond.

Today was also the ceremonial passing of the District Governor gavel.  It was my honor to hand it over to DGE Lion Kathy Fouse.  I wish her all the best as she heads to the International Convention later this month. 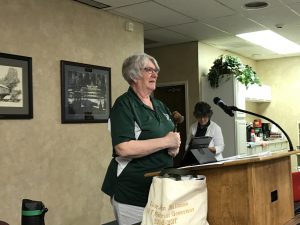 Let’s finish this year strongly and continue on into the second century of Lionism. 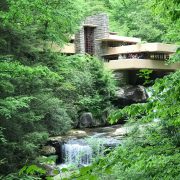 In our last post, we talked about the first couple days of the convention including the service project we had to feed 180,000 people.

That evening, we continued with the International Banquet.  The banquet started off with the presentation of our District Governors-Elect including our own DGE, Lion Kathy Fouse. 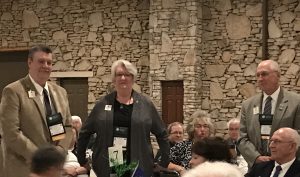 We also got to hear from our guest and featured speaker, International President Chancellor Bob Corlew.  He shared some great stories with us from his year as President and gave us encouragement as we move into our second century as Lions.  Here’s a picture of him with Past International Director Robert Miller as they recognize one of our state Lions. 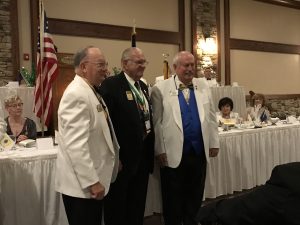 Sunday morning began with voting and a State Council business meeting to review the results of the voting and of the whole convention.  Posted around the room were all of the centennial banners from the 17 districts in the state.  As you can see, District 14-T’s also hung proudly with the signatures from our Lions, Lionesses, and Leos. 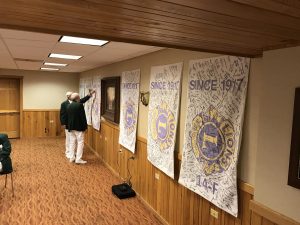 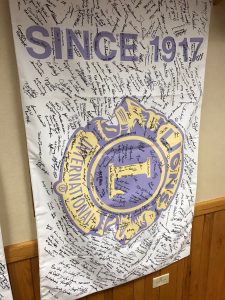 Finally, on Sunday evening, we had our Honors Banquet where we recognized our DGE’s and “pinned” them with a District Governor pin.  We are all so proud of DGE Lion Kathy and wish here all the best as she heads to Chicago later this month. 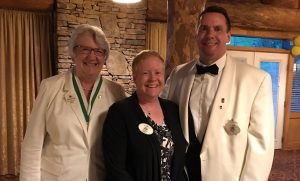 All in all, the State Convention was a wonderful experience and I’m so happy to have seen so many Lions and Lionesses from District 14-T.

The Lions. Lionesses and Leos of District 14-M and Multiple District 14 sadly report the recently passing of Past District Governor James E. “Jim” Higinbotham last Tuesday, May 23, at the age of 88.

Visitation for PDG Higinbotham will be held Friday, May 26, from 2-4 p.m. and 7-9 p.m. at Schrock-Hogan Funeral Home & Cremation Services, Inc., 226 Fallowfield Avenue, Charleroi. A Lions Service of Remembrance will be held at 8 p.m. at the funeral home. Lions in attendance are urged to gather at 7:50 p.m.

Funeral services for PDG Higinbotham will be held at 11 a.m. Saturday at the funeral home. Interment will follow in the Maple Creek Cemetery in Fallowfield Township. In lieu of flowers, donations may be made to Fallowfield Township Volunteer Fire Department, 1660 Route 481, Charleroi, PA 15022 or PA Lions Beacon Lodge, 114 State Street, Mt. Union, PA 17066.